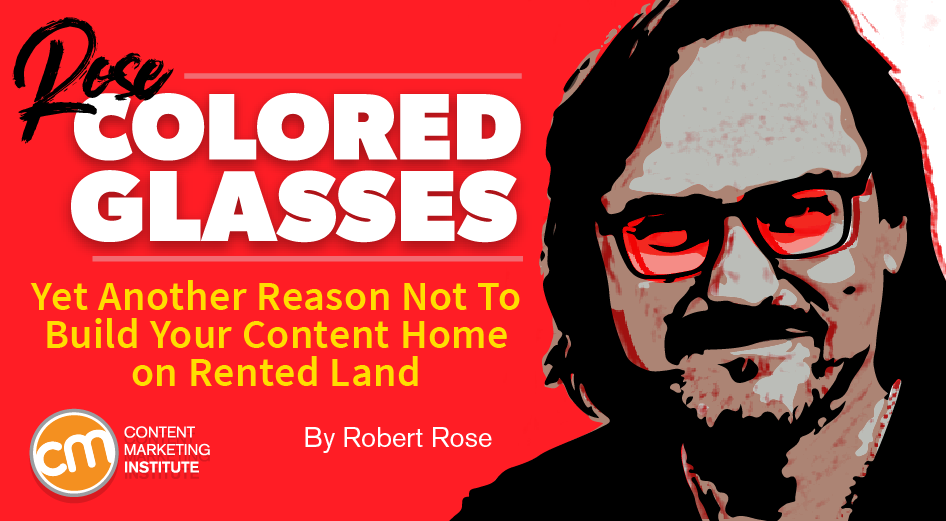 It seems like a good time to talk about rented land again.

This week, Twitter accepted Elon Musk’s bid to purchase the company in a leveraged buyout and take it private. Apparently, Musk loves the product so much that he bought the company.

Does that sound familiar? Gen X and Baby Boomers might remember the catchphrase “I liked it so much, I bought the company” from Remington electric shaver commercials in the 1980s.

The seemingly ubiquitous ads featured Remington Products President Victor Kiam explaining how he’d been a dedicated blade shaver before his wife gave him a Remington Micro Screen shaver. Kiam bought the company in 1979 (in another leveraged buyout) and took it from losing $30 million a year to profitability in only one year.

His role as the spokesperson for the Remington shaver made the brand a cultural phenomenon.

And it’s a safe bet that Musk will quickly become one of the (if not the) most notable spokespeople for Twitter. Only time will tell whether he can duplicate Kiam’s success – especially since he’s such a polarizing figure.

@ElonMusk liked #Twitter so much, he bought the company. (Remember those Remington ads?) Will he be as successful as Victor Kiam? @Robert_Rose has some thoughts via @CMIContent. Click To Tweet

Everyone – from Twitter users to observers to employees – seems to have a strong opinion about the company’s acquisition and future. In a recent poll of Twitter employees, 44% said they were “neutral” on Musk, 27% said they loved him, and 27% said they hated him.

One thing’s for sure – the deal gives Musk complete control over the social media network.

The risky business of building content homes on rented land

At CMI, we’ve been warning people not to build their content homes on rented land for nearly a decade. CMI founder Joe Pulizzi and I often get credit for that warning. But we took our inspiration from something we read on Wired founder John Battelle’s (still excellent) blog way back in 2014.

If you’re going to build something, don’t build on land someone else already owns. You want your own land, your own domain, your own sovereignty.

This phrase restated advice from an earlier post and speaking engagements:

If you are a brand, publisher, or independent voice, don’t put your taproot into the soils of Facebook.

I’m not gonna lie. The revision works much better than the original.

Battelle was referencing the growing notion among brands at the time that websites and other owned media were unneeded. Ten years ago, many marketers thought the fast growth of Facebook Pages made it a good idea to build their entire online presence within Mark Zuckerberg’s walled garden.

Here’s the problem: Investing in “rented land” (e.g., social media) means spending on something you don’t own. You’re risking your entire investment on a platform whose leaders could make changes that don’t benefit you.

Cautionary tales have emerged about entire audiences wiped away by algorithm updates or other changes that took the value of being on a platform like Facebook (or Twitter) to zero.

Let’s break that advice down.

The first confusion arises from what “rented” means. Any content platform you don’t control is rented land. Any platform that doesn’t allow immediate access to all your content and everyone in your audience is rented land (regardless of whether you pay for the space to build or promote your content).

But social media platforms aren’t the only landlords. Any network where access to the audience or your content is at the platform’s discretion, including podcasting distribution networks like Apple Podcasts, Google Podcasts, Stitcher, and long-form or multimedia platforms like Medium or Clubhouse.

How to use your rental the right way

Renting isn’t a bad thing. Finding your audience on rented platforms is critical for content and marketing strategy. But think of these platforms as rivers, not lakes. Use them to flow users to your own home (a website, resource center, email newsletter, etc.).

Build an outpost, but own your home

I often hear pushback about the advice to avoid building on rented land. The argument goes like this: Marketers have no choice but to invest in rented land because that’s where our audiences are.

I agree. This isn’t a zero-sum game.

But don’t get hooked on the rush of finding audiences on social media or other rented platforms. I’ve watched brands pour money into social media platforms only to see their initial traffic and engagement eventually go up in smoke.

Yes, you can and should build on rented land. But only build things you’re willing to lose or that you can easily transfer elsewhere. Any marketer who ignores search engine marketing does so at their peril. The same is true of social media.

So, use social platforms, podcasts, and other rented lands to reach audiences. But don’t build a strategy designed to keep them there. That approach benefits the landlords in the long run, not you.

You can (and should) build on rented land, as long as you only build what you’re willing to lose or can easily transfer, says @Robert_Rose via @CMIContent. Click To Tweet

Subletting through influencers is renting, too

Creating relationships with industry influencers, celebrities, and other content creators has become one of the most significant go-to-market strategies.

Working with an influencer lets you access their credibility to convey your brand or product story. You’re banking on their influence with an audience to provide a “halo effect” for your brand.

But influencers want to keep audiences loyal to them, not you.

This tension is healthy – until it isn’t. For example, one big B2C brand we worked with recently featured an up-and-coming pop star as an influencer. But every mention of the star on the brand website simply linked to the upcoming concert tour. How did that benefit the brand?

Remember that people evolve (and sometimes devolve) over time, just as algorithms do. Be careful about building anything that relies too much on an influencer who may change in ways you can’t control.

Elon Musk has taken the advice to avoid building your home on rented land quite literally. He found he’d already invested enough time and energy into land he couldn’t control. So he bought the land.

Will Twitter go the way of Remington Products, with a new owner and spokesperson elevating the brand and resonating with new audiences? Maybe.

In the meantime, everyone who has invested in a Twitter presence finds themselves facing the whims of a new landlord.

Ralph Waldo Emerson once wrote, “In a tavern, everybody puts on airs except the landlord.” He meant that no one is themselves in the public square except the person who owns the square.

I think it’s fair to adapt that quote for Twitter and other rented platforms, where nobody gets free speech except the landlord.

HANDPICKED RELATED CONTENT: The Seductive Power of the Dark Side [Rented Land]

https://www.youtube.com/watch?v=videoseries
Subscribe to workday or weekly CMI emails to get Rose-Colored Glasses in your inbox each week.