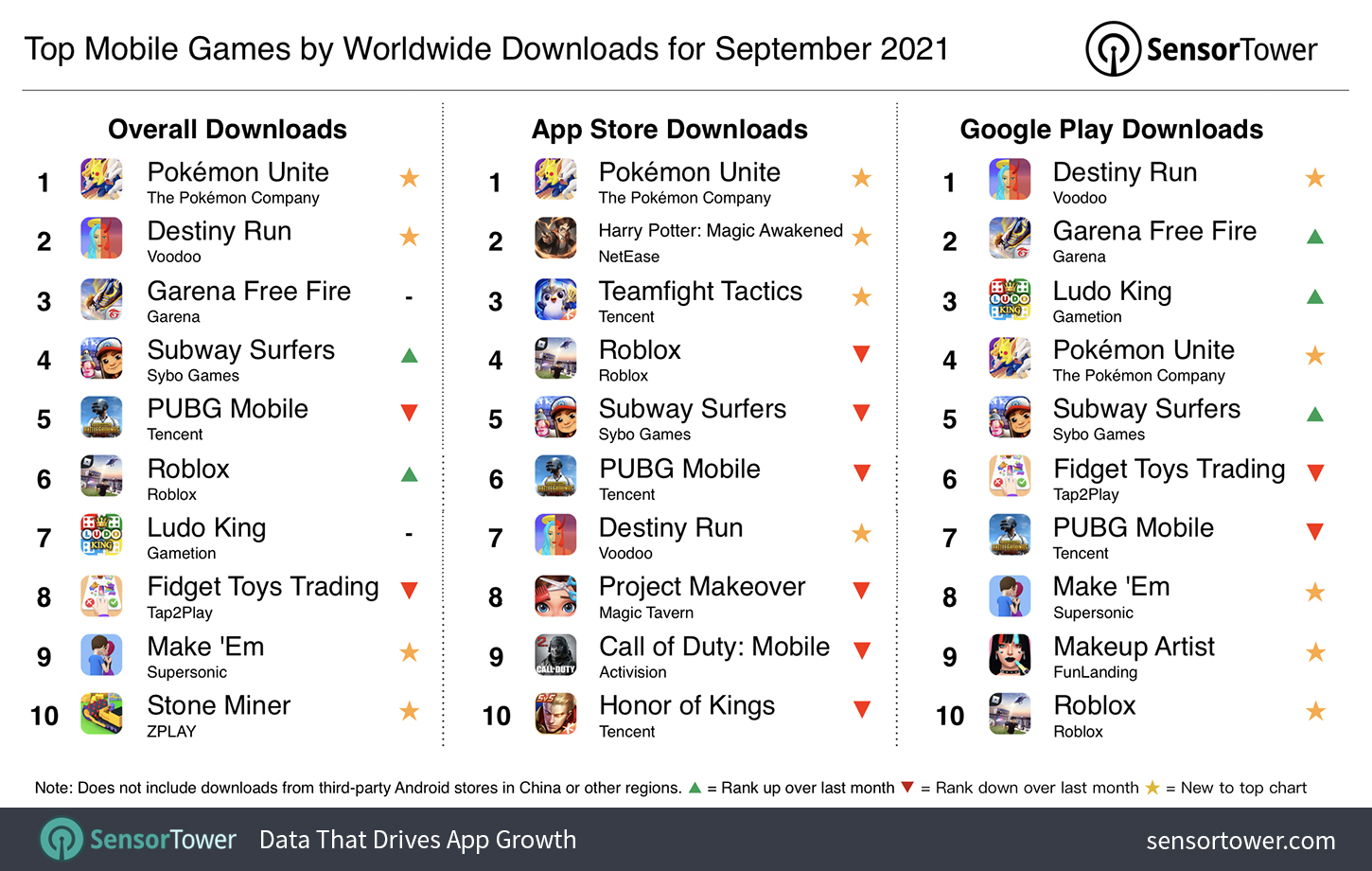 Pokémon Unite from The Pokémon Company, in collaboration with Tencent, was the most downloaded mobile game worldwide for September 2021 with approximately 33 million installs. The countries with the most installs of the app during this period were the United States at 21.8 percent of its total downloads and Brazil at 12 percent. The full top 10 ranking of mobile games worldwide by downloads for September 2021 is above. Game download estimates are from Sensor Tower’s Store Intelligence platform.

Destiny Run from Voodoo was the second most installed mobile game worldwide last month with 26.8 million installs. The countries with the largest number of Destiny Run installs were Brazil at 11 percent, followed by India at 10 percent. Garena Free Fire from Garena, Subway Surfers from Sybo Games, and PUBG Mobile from Tencent rounded out the top five most installed mobile games worldwide for the month.

The global mobile games market generated 4.2 billion downloads across the App Store and Google Play in September 2021, marking a decline of 4.3 percent year-over-year. The No. 1 market for global game downloads was India, which accumulated 746.7 million installs, or 17.7 percent of total worldwide downloads. The U.S. ranked No. 2 for downloads at approximately 8.3 percent, followed by Brazil at 8.2 percent.

Publishers in China dominated the App Store downloads chart in September, with Tencent and NetEase behind the top three most installed titles: Pokémon Unite, Harry Potter: Magic Awakened, and Teamfight Tactics, with the latter two games benefitting from recent launches in China. In total, Chinese publishers had a hand in seven of the top 10 most installed titles on the App Store, including PUBG Mobile, Project Makeover from Magic Tavern, Call of Duty: Mobile from Activision, in partnership with Tencent’s TiMi Studios, and Honor of Kings, also from Tencent.

Want to see how the rankings compared to the previous month? Check out the Top Mobile Games Worldwide for August 2021 by Downloads here](https://sensortower.com/blog/top-mobile-games-worldwide-august-2021-by-downloads).

Store Intelligence users can see app download estimates for the above apps in addition to historical performance metrics on the Sensor Tower platform. Our estimates include downloads for the App Store and Google Play worldwide between September 1, 2020 and September 30, 2021. Apple apps and Google pre-installed apps are excluded. We report unique installs only. Android estimates do not include third-party stores. Figures represent aggregate installs of all app versions, ex: Facebook and Facebook Lite.