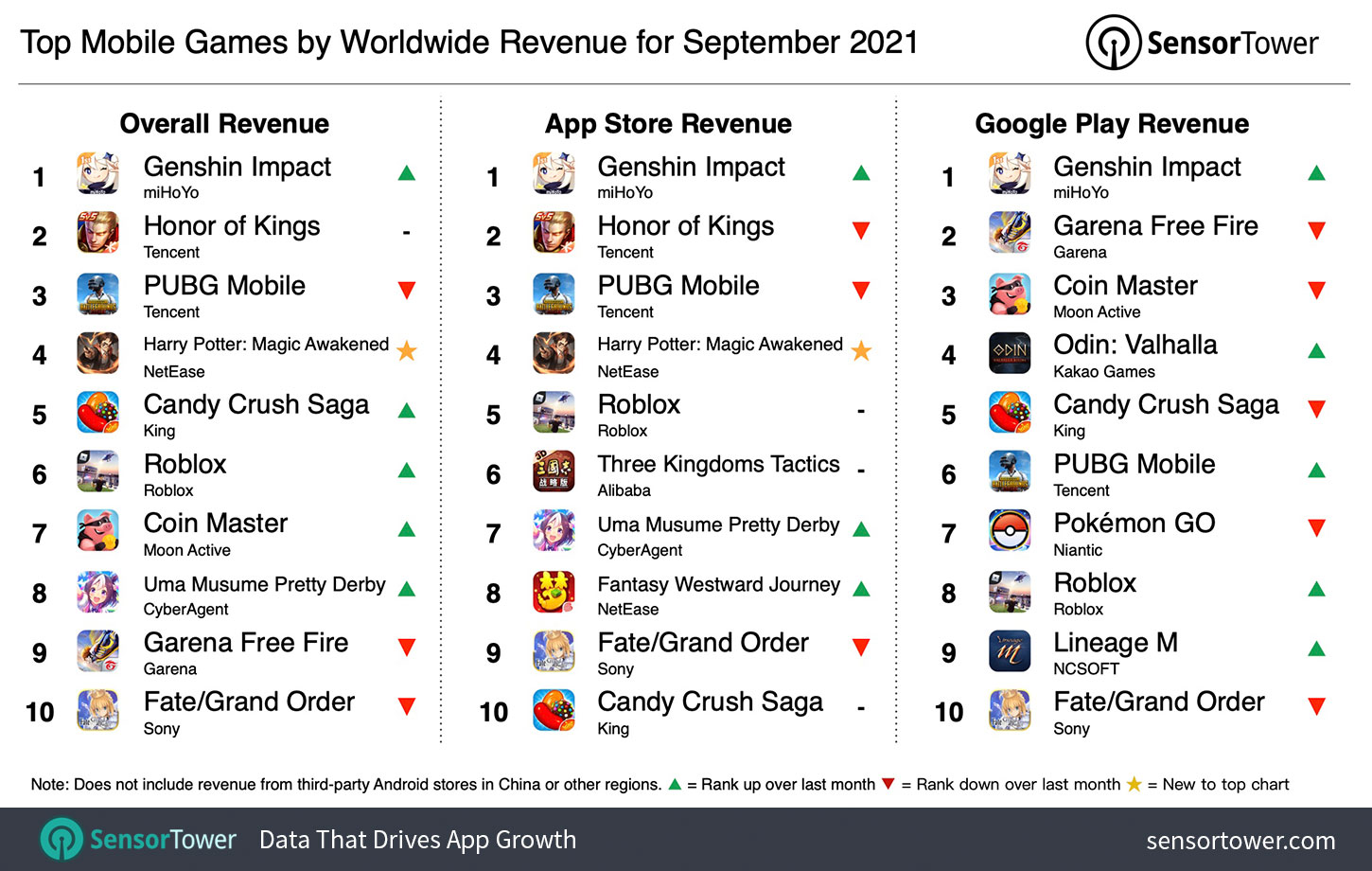 The top grossing mobile game worldwide for September 2021 was Genshin Impact from miHoYo with $341.7 million in player spending. Approximately 31.6 percent of Genshin Impact’s revenue was from China’s App Store, followed by 21.7 percent from the United States and close to 21 percent from Japan. The full ranking of the top grossing mobile games for September 2021 is above. Game revenue estimates are from Sensor Tower’s Store Intelligence platform.

Honor of Kings from Tencent was the second highest earning mobile game worldwide for September 2021 with $209 million in gross revenue. About 95 percent of Honor of Kings’ revenue was from China, followed by 2 percent from Taiwan. The next top grossing game was PUBG Mobile from Tencent, followed by Harry Potter: Magic Awakened from NetEase and Candy Crush Saga from King.

The global mobile games market generated $7.3 billion from player spending across the App Store and Google Play in September 2021, marking an increase of approximately 11 percent year-over-year.

The No. 1 market for global revenue in September 2021 was the United States, which accumulated approximately $2 billion, or about 28 percent of total player spending worldwide. Japan ranked No. 2 for revenue at 20.5 percent, followed by China, where Google Play is not available, at approximately 18 percent

Harry Potter: Magic Awakened was one of the world’s largest mobile game launches this year, accumulating $138.2 million from player spending in its first month. The title is only available in select countries, generating approximately 94 percent of its revenue from China, followed by 3.6 percent from Taiwan, and 2.4 percent from Hong Kong. It’s the most successful mobile launch ever for a title utilizing the Harry Potter licence, following in the footsteps of games such as Harry Potter: Wizards Unite from Niantic and Harry Potter: Hogwarts Mystery from Jam City, the latter of which accumulated $300 million from global player spending in three years..

Want to see how the rankings compared to the previous month? Check out the Top Grossing Mobile Games Worldwide for August 2021.

Store Intelligence users can see app revenue and app download estimates for the above apps in addition to historical performance metrics on the Sensor Tower platform. Our revenue estimates are from the App Store and Google Play worldwide between September 1 and September 30, 2021 and represent gross user spending. These rankings do not include app revenue from third-party Android stores.