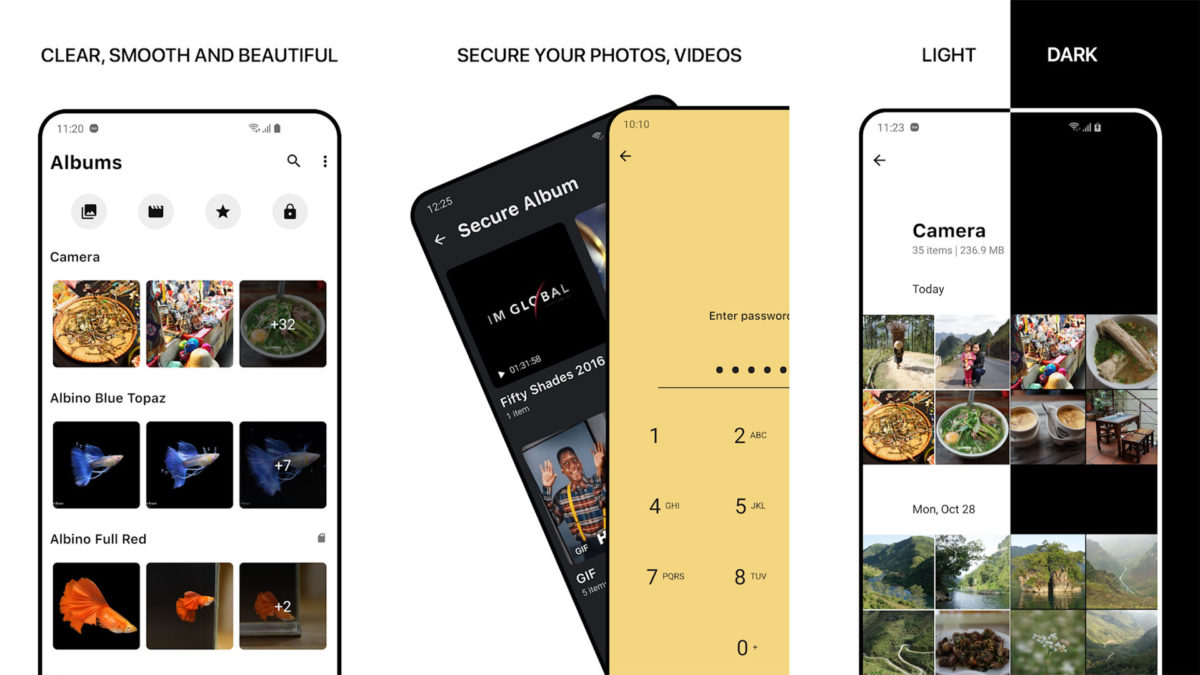 Despite the simple premise, not all gallery apps are the same. Some of them work fantastically with great designs and quickness. Others suffer from poor design and slowness. The good news is that you have plenty of options to replace yours if needed. Whether it’s sorting pics, hiding them away, or you just want something clean and quick, we have you covered with the best gallery apps for Android. Don’t forget that OEM gallery apps are still quite good so it might be hard to find something objectively better than some of them.

The best gallery apps for Android

1Gallery is the newest gallery app on the list. It’s also a mix between a standard gallery app and a gallery vault app. The app works like any standard gallery and you can view your photos by date and in grid form. However, the app also lets you hide your photos and videos behind a pin, pattern, or fingerprint lock. The hidden files are not only hidden but also encrypted for your privacy. Some other smaller features include a super simple photo and video editor function as well as a light and dark theme. It’s cheap, decent, and it should get better over time.

A+ Gallery is a simple gallery app. You can do the usual things like managing your photos, creating photo albums, and sharing your photos. Along with that, it has support for Dropbox, Amazon Cloud, and Facebook. That means you can view those photos as well. Additionally, it comes with a vault feature where you can keep private images. The design is solid and it’s not difficult to use. It combines Material Design and iOS styles into a single look. You can download it for free with an optional pro version available as an in-app purchase. It’s not bad as far as gallery apps go.

F-Stop Media Gallery is one of the older gallery apps. This one features a flatter, cleaner design accentuated by Material Design with a few really decent features. You can search your photos based on their metadata which is kind of awesome and you can add tags to your photos for easier organization. It also reads metadata (including EXIF, XMP, and IPTC info), and there is a Smart Albums feature that helps you sort your stuff on its own. Best of all, it plays GIFs! This is easily one of the most flashy gallery apps for those who like their stuff loud. Some of the features require the pro version, but the free version is still very functional.

Focus Go is a newer gallery app. It’s a lighter version of the popular Focus gallery by Francisco Franco. It’s a lightweight and simple gallery app. You open it, it opens files, you can share them, and that’s really all you need. It doesn’t include a third-party editor to help with the app size. Additionally, it has an optional 32-bit encoder for better image quality and some customization options as well. The main Focus gallery app is under development for a major overhaul. Thus, if you want something like this with even more features, the best bet is to check that out on Google Play and see if the massive update has dropped yet.

Gallery Vault does almost exactly what the name says it does. It creates a private vault for your photos to keep them away from prying eyes. With it, you can hide photos, videos, and any other type of file that this app supports. You can also hide the icon so no one knows how to access it but you, get alerts if someone breaks in, and it supports some fingerprint-enabled devices (Samsung devices only for now). It’s a good option in terms of gallery apps if you want some privacy and you can try out the free version before you buy it.

As with most lists, here is the mandatory Google option. The Google Photos app is a cloud storage app where you can upload as many photos and videos as you want. The only downside is that the images and video will be compressed in Google’s High-Quality setting. However, the app is also capable of seeing your device folders to view any stuff that you haven’t uploaded. Unfortunately, Google is ending the free part of it starting in June 2021 so this isn’t quite the easy recommendation it used to be, but it’s still a good gallery app.

Memoria Photo Gallery is one of the newer gallery apps on the list. This one features a good level of customization, generally smooth performance, and even some security features. You get themes, fingerprint authentication, and you can even hide albums you don’t want. The app also comes with an encrypted vault and various view modes. It seems to tick all of the boxes, although the app still has the occasional bug here and there. The developers are in a bit of a rough patch with this one, but when it works, it works really well.

PhotoMap is one of the more unique gallery apps. It lets you take pictures and save them via location. You can then use a map to view your photos based on where you took them. For instance, you’d have to navigate to the beach to see the pictures you took near the beach. It’s one of the cleaner GPS-based gallery apps that we could find. It’s also just fun to play with. You can download it for free or pay for the pro version for $2.99 as an in-app purchase. There are even AR features to play with.

Piktures is one of the simpler gallery apps. However, that doesn’t mean it has no features. You can sort by various things, such as location and you can hide albums if you don’t want people to see them. It works best on larger screens. That makes it decent for large phones or tablets. There is also GIF support for those who enjoy that. It appears as though Chromecast support is on its way as well. It also has gesture-based controls which are delightful to use once you get used to them. It’s a solid option all around.

Simple Gallery Pro is, well, a simple gallery app. The app is fully offline with no unnecessary permissions. In addition, you get an image and video search, support for 32 languages, a favorite function for quick access, a recycle bin to recover lost photos, and plenty of ways to filter your massive collection. There is also a security feature with a fingerprint unlock for added privacy. There was a free version of the app. However, only the premium version gets updates now. That’s not a big deal because the app is only $0.99. Plus, it’s open-source and it supports most types of photos and videos.

If we missed any of the best gallery apps for Android, tell us about them in the comments! You can also click here to check out our latest Android app and game lists.