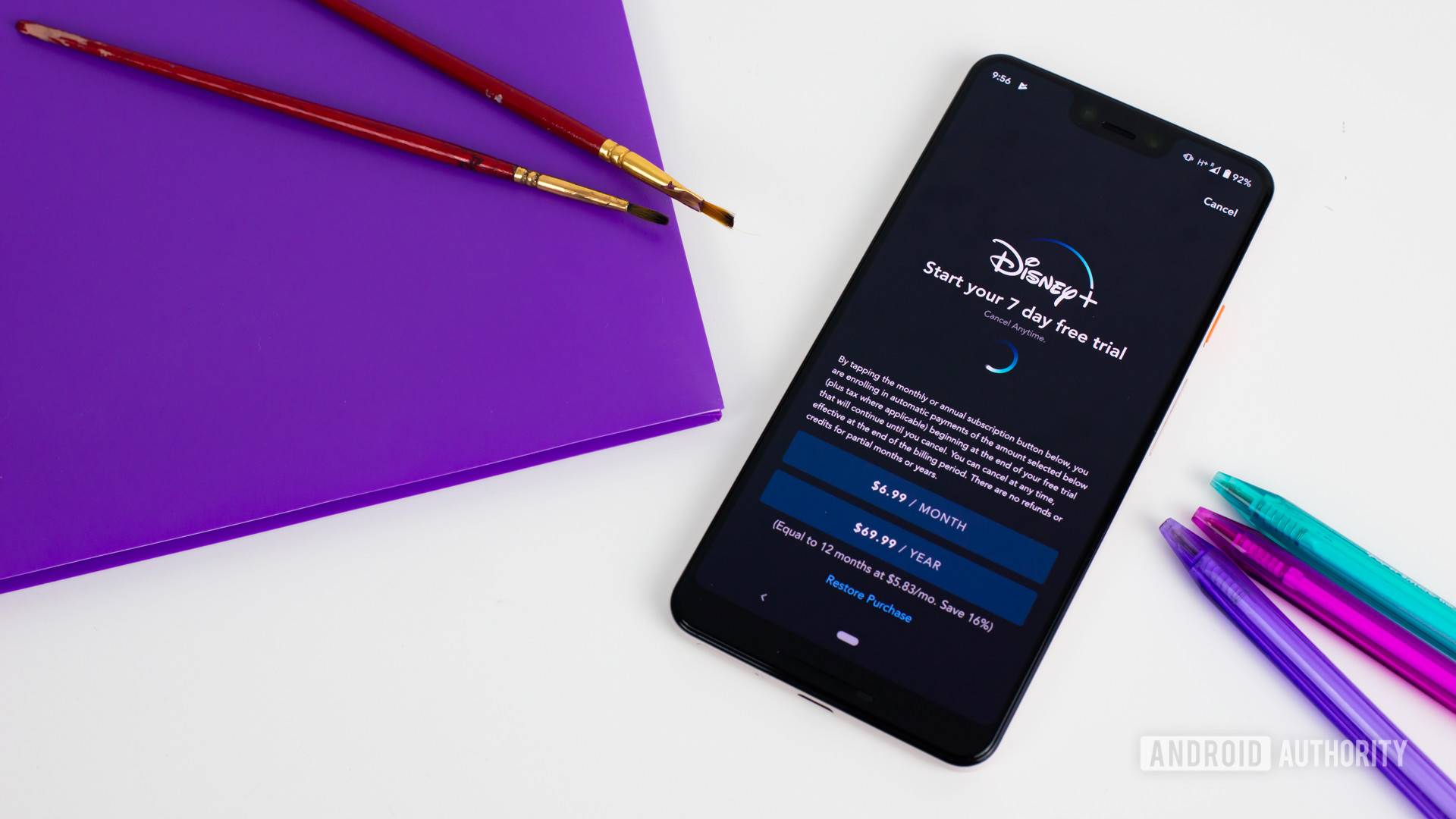 Disney is quite a large media property these days. They own ABC, ESPN, Marvel, Lucasfilm, and, soon, Fox. That means there are a bunch of ways to interact with Disney stuff. However, we think that people looking for Disney apps want the more classic Disney characters and experiences. We can definitely help with that. Disney is, again, massive. They have movies, TV shows, and music across plenty of genres. We can help you find what you’re looking for. Here are the best Disney apps for Android.

The best Disney apps for Android

Disney+ is the biggest Disney app release in recent memory. It features a bunch of Disney shows and movies along with content from Disney-owned properties (such as The Simpsons) and some original content such as The Mandalorian. It is a massive success for Disney so far and it’s the obvious choice for a list like this. Additionally, you can get Hulu, Disney+, and ESPN+ for $12.99 and it’s honestly the best deal in streaming right now. This is easily the best Disney app.

DisneyNow is Disney’s current streaming service. You log into the service with your existing TV cable provider info and gain access to a bunch of Disney TV content. That includes kids’ shows, cartoons and live-action stuff, classic and new Disney characters, and even Radio Disney. Disney+ is an excellent streaming service, but you still get more day-to-day Disney content from this than you do from Disney+ and this still integrates with your cable TV provider if you still have one.

Fandom by Wikia is a community of enthusiasts that create these little wiki pages for various media properties. It used to be a collection of apps for various fandoms but it’s now a single app with every topic available. The app generally provides information about characters, movies, TV shows, and even some games. It’s a neat way to learn some trivia about basically any Disney movie, show, or character. Of course, it’s a bit of a niche product. Trivia buffs should definitely try this one.

There are a few different versions of iHeartRadio. However, for Disney stuff, we recommend iHeartRadio Family. It has 80 stations of family-friendly music from a bunch of popular kids’ shows and movies. Of course, that includes plenty of Disney content. You can go with a station dedicated to Disney princess songs or just hit up the standard Radio Disney for a big mix of music from Disney. Of course, the full version has all of these stations as well so current fans of iHeartRadio just need to hit up the search button to find these stations. The premium version adds unlimited skips and a bunch of other features as well.

It’s easier (and cheaper) to watch TV than ever before. TV services like Hulu, Sling TV, YouTube TV, PlayStation Vue, and DirecTV Now all have a bunch of excellent child-friendly content. Consequently, they also all have access to the Disney Channel along with a bunch of backlogged Disney content. For instance, on Hulu, if you subscribe to the live TV service, you get the Disney Channel, but also access to movies like Pocahontas.

The amount of Disney content per streaming service varies, but you can at least get the actual channel on all of them. Honestly, this is probably better than cable for Disney stuff because you do get those on-demand titles as long as you’re subscribed to the live TV service. Plus, Disney has a Disney+, ESPN+, and Hulu subscription bundle for a pretty great price here.

Movies Anywhere is probably the best app for movies on Google Play. It isn’t its own standalone streaming service. It’s actually a collection of other movie streaming services. You sign in with your iTunes, Amazon, Vudu, or Google Play. All of the movies you purchased on all of those services are now available in one spot. The service boasts over 7,500 movies and that, of course, includes tons of Disney movies along with basically every Marvel and Star Wars movie as well. Disney is likely going to have all of those movies on Disney+ when it comes out. Until then, though, this is probably the best place to actually buy a Disney movie and watch it. The app is occasionally buggy, but it’s otherwise quite good. It also comes with Chromecast support.

Disneyland and Disney World are two of the most popular vacation spots in the world. They also both have official apps. The My Disney Experience app focuses primarily on Disney World. You can use it to plan your vacation, as an interactive map of the park, and you can even buy your tickets and merch there. The Disneyland app is much the same way. The app shows you information like estimated wait times, browser restaurant menus, and interact with the park’s map. There are apps for all of Disney’s parks individually, including the ones in Paris, Hong Kong, and Shanghai. Those headed to Disney World or Disneyland should definitely have these apps on hand.

Reddit is good for a lot of fan bases and Disney fans are no exception. The site has dozens of subreddits for Marvel properties, Star Wars movies, and, of course, classic Disney properties as well. You can talk to other people who like the stuff that you like and post stuff that you care about. The Reddit app keeps everything under moderate control, although people who haven’t used Reddit before may have a tough time acclimating at first. In any case, this is a great way to read up on news about Star Wars, Marvel, or other Disney properties and discuss those things with other fans. The premium subscription removes advertising and gives you some additional features as well.

We’ve said over and over again that Disney is a huge company. As it turns out, there are a variety of official Disney apps for most of those properties. Some examples include the official Star Wars app, the official Marvel app, the ESPN app, ABC’s official app, and the list goes on and on. These official apps are among the best ways to interact with Disney’s massive list of media companies. For instance, you can watch ABC’s programming on the ABC app or read about the latest Star Wars news in the Star Wars app. You can even read old Marvel comics in the Marvel app. It really depends on what kind of content each property makes, but it’s all still Disney.

YouTube is an excellent, albeit obvious, choice for a great Disney app. You can find basically any Disney song ever made there along with a ton of clips and memes from various movies and TV shows. That’s also the place to see trailers for upcoming movies or shows, reviews of various toys or games, and basically anything else you can think of. Disney has an official VEVO channel with over 11 million subscribers. But, again, you probably already knew all of this so this part of the list is really just some confirmation bias. Yes, YouTube is among the best apps for Disney fans. You can optionally pay $12.99 per month to remove ads, download videos for offline use, and get a few other features.